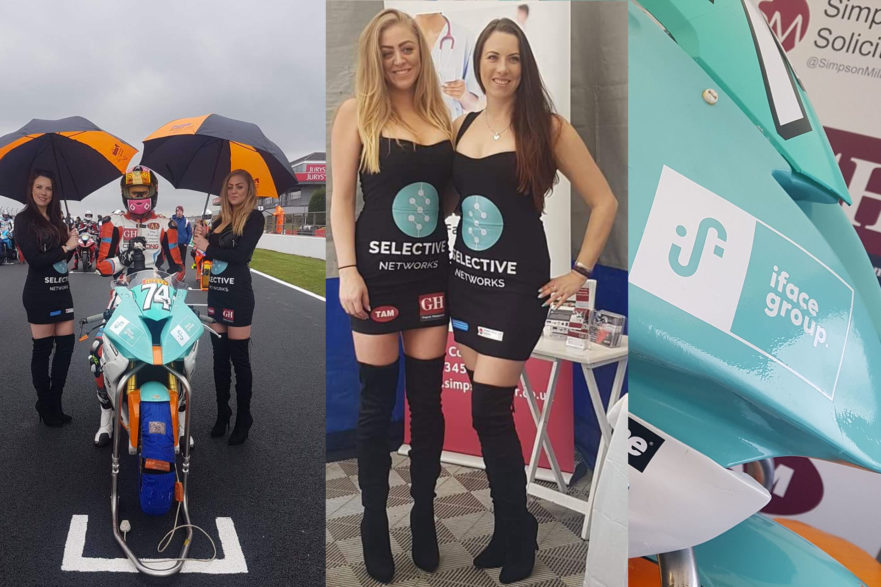 Donington park was round one for the team with the new advertising boarding for our sponsors and title sponsor Selective Networks.

Bank holiday Friday was used to set up the awning and display boards before starting on the bike preparation ready for free practice 1 on Saturday at 12:55.

FP1 was the first time out on track in England and the traditional English weather lived up to its name! The track was wet and very cold for the whole session, going out on used wet tyres we ended the session in 24th position.

FP2 the track has started to dry out with a small dry line in certain places, again using wet tyres we ended the session in 13th position after completing 11 laps.

Sunday included qualifying at 09:35 and a ‘100 mile’ race at 13:55. The qualifying session was mainly dry with a few damp patches around the track, so full dry tyres and dry set up was used.
Qualifying didn’t go to plan after small issues with the brakes and I couldn’t get comfortable on the bike. Finished the session in 28th position from 49 riders.

The 100 mile race was next and starting down in 28th was not ideal so the best we could hope for was a good race with a good grid slot for the man main on Monday, after only completing one lap I had brake issues with the lever being very inconsistent, one the next lap I went into the first corner at 130mph with no brakes! After running on into the gravel trap I jumped off the bike before hitting the tyre wall, fortunately only relatively minor damage was done to the bike. Not the best way to start the season!

For Mondays main race I would have to start from 35th due to the crash in the 100 race.

The race got underway at 14:55 due to the adverse weather conditions and morning warm up being cancelled due to standing water on the track.

From 35th I worked through to 22nd before an issue with the quick shifter and auto blipper started with about 4 laps to go, after that I ended up finishing 23rd. A positive to take from the race is that my race times before the issue was similar to 10th – 15th position which meant if we didn’t have the crash in race one we would have been a lot higher up the pack.

Over the next few weeks we will be repairing the race bike, continuing gym work and looking at ways to develop and lighten the bike.

Next time on track for the team is the Oulton Park test on Thursday 26th April. After this is the race weekend there on 5th – 7th May were we intend to be a lot higher up the grid which the whole team deserve.

We would like to thank all our sponsors and supporters for getting us onto the grid this season! Without them we would be there at all!